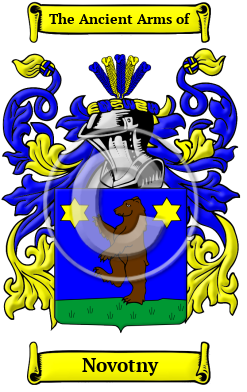 The name Novotny is a nickname surname, formed from the Czech "novy," which means 'new'. The name was generally used for a "newcomer to a particular region" or "newly settled neighbor" or "a newcomer to the village." Ironically it was also used for a maker of new shoes (not for a repairer of shoes). Novak is the most popular Czech name; and Novotny is the third most common. As the name translates as "newman' some people have Anglicized their name accordingly. The feminine form of the name is Nováková.

Early Origins of the Novotny family

The surname Novotny was first found in Bohemia and Moravia.

Another 42 words (3 lines of text) are included under the topic Early Novotny Notables in all our PDF Extended History products and printed products wherever possible.

In the United States, the name Novotny is the 4,747th most popular surname with an estimated 7,461 people with that name. [1]

Novotny migration to the United States +

Novotny Settlers in United States in the 19th Century