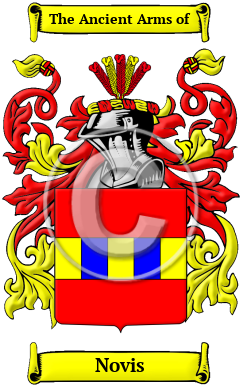 The distinguished surname Novis can be traced back to the ancient and beautiful region of Venice. Although people were originally known only by a single name, it became necessary for people to adopt a second name to identify themselves as populations grew and travel became more frequent. The process of adopting fixed hereditary surnames was not complete until the modern era, but the use of hereditary family names in Italy began in the 10th and 11th centuries. Italian hereditary surnames were developed according to fairly general principles and they were characterized by a profusion of derivatives coined from given names. The surname Novis came from the personal name Novello. The Italian word "novello" is derived from the Latin "novellus," which means "new."

Early Origins of the Novis family

The surname Novis was first found in Venice, the most famous city of the Veneto region, is noted for the beautiful Cathedral of Saint Mark, and the unique canals which wind throughout the city. It is in this rich Italian region that origins of the Novis surname are found. Roots of the Novis family have been located in the city of Padua, with Riccardino Novelli, a government consul in 1113.

Early History of the Novis family

This web page shows only a small excerpt of our Novis research. More information is included under the topic Early Novis History in all our PDF Extended History products and printed products wherever possible.

Prominent among members of the family was Andrea, Antonio, and Giovanni Novello, who were involved in the Senate in Genoa during the late 13th century; Prosavio Novelli was Bishop of Ceneda in 1264; Luigi Novelli was a military Captain of 600 soldiers and was known for his bravery and outstanding conduct; Giuliano was mayor of Florence in 1293; many members of the Novelloni family of Bologna were involved in the Senate during the 14th century; also of this lineage was Pope Benedetto XII, who was elected in 1334; Francesco...
Another 88 words (6 lines of text) are included under the topic Early Novis Notables in all our PDF Extended History products and printed products wherever possible.

Novis migration to the United States +

Novis Settlers in United States in the 17th Century

Novis Settlers in Australia in the 19th Century

Novis Settlers in New Zealand in the 19th Century