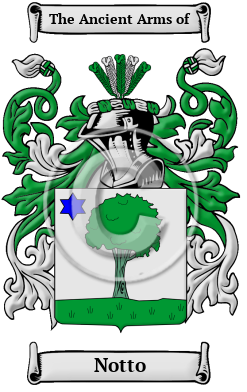 The Notto surname is a habitational name, taken on from the place name Noto in Siracusa province, Sicily.

Early Origins of the Notto family

The surname Notto was first found in Palermo (Sicilian: Palermu, Latin: Panormus), a city in Insular Italy, the capital of both the region of Sicily and the Province of Palermo at the foot of Mount Pellegrino, originally a Phoenician colony in the 3rd century B.C. Carthage and then the Saracens in 835 each occupied the city. The Norman period from 1050 was the most important and many ancient ruins exist from that time period. Two city gates still remain. The museum is notable and has many priceless relics. In those ancient times only persons of rank, the podesta, clergy, city officials, army officers, artists, landowners were entered into the records. To be recorded at this time, at the beginning of recorded history, was of itself a great distinction and indicative of noble ancestry.

Early History of the Notto family

This web page shows only a small excerpt of our Notto research. Another 100 words (7 lines of text) covering the years 1706, 1773, 1774 and 1774 are included under the topic Early Notto History in all our PDF Extended History products and printed products wherever possible.

Spelling variations of this family name include: Noto, Notto, Notoo, Notow, Notoe and others.

More information is included under the topic Early Notto Notables in all our PDF Extended History products and printed products wherever possible.

Notto migration to the United States +

Notto Settlers in United States in the 19th Century