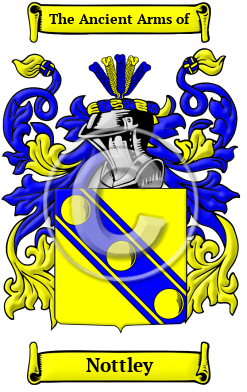 The Nottley surname is thought to have been a habitational name from the places Black and White Notley in Essex. These place names derive from the Old English "hnut" meaning a "nut tree," and "le-ah," which referred to a "clearing." [1]

Early Origins of the Nottley family

The surname Nottley was first found in Essex at Black Notley or White Notley, parishes, in the union of Braintree, hundred of Witham. These ancient Saxon villages date back to 998 when they were both known as Hnutlea. [1] By the time of the Domesday Book of 1086, the village was known as Nutlea. [2] "White Notley and Black Notley formerly constituted one township, styled in Domesday Book Nutlea, Nutleia, and Nuchelea, and in other records Nutteslega and Nutelegh: the name is supposed to signify 'a nut pasture.' " [3] By the 13th century the villages had split to become Blake Nuteleye in 1252 and White Nuteleye in 1235. [1] Notley Abbey, an Augustinian abbey near Long Crendon, Buckinghamshire was founded between 1154 and 1164 by the second Earl of Buckingham, Walter Giffard and his wife, Ermengar.

Early History of the Nottley family

This web page shows only a small excerpt of our Nottley research. Another 86 words (6 lines of text) covering the years 1665, 1676 and 1679 are included under the topic Early Nottley History in all our PDF Extended History products and printed products wherever possible.

Spelling variations of this family name include: Nottley, Notley, Notleigh, Nott and others.

Another 37 words (3 lines of text) are included under the topic Early Nottley Notables in all our PDF Extended History products and printed products wherever possible.

Nottley migration to the United States +

Nottley Settlers in United States in the 17th Century