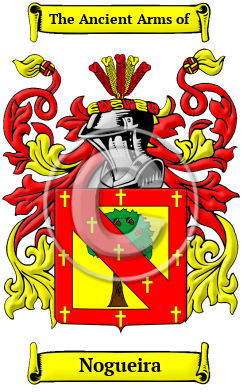 Early Origins of the Nogueira family

The surname Nogueira was first found in the Galician province of Lugo in the village of Nogueira. The earliest reference to the Nogueira family includes don Mendo Paes Nogueira who was a knight in "la Orden de los Templarios" in 1089.

Early History of the Nogueira family

This web page shows only a small excerpt of our Nogueira research. Another 100 words (7 lines of text) are included under the topic Early Nogueira History in all our PDF Extended History products and printed products wherever possible.

Spelling variations of this family name include: Noguera, Noguer, Noguero, Nogueras, Nogueres and many more.

Migration of the Nogueira family

Some of the first settlers of this family name or some of its variants were: Esteban Noguer who arrived in the Spanish Main in 1557; Gaspar Noguera who settled in New Granada in 1569; Pedro Noguero who settled in Dominican Republic in 1576.