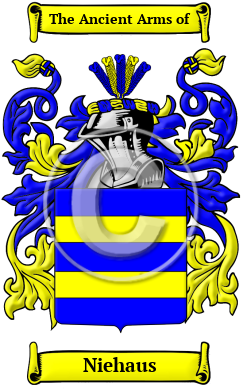 The roots of the Niehaus family lie in the German duchy of Westphalia. The surname Niehaus is derived from two words, "nie," a Low German word meaning "new," and "haus," the standard German word for "house." Thus, the name may have been originally given to someone who owned his own house as opposed to being a tenant, or to someone who was connected with a new or important building in the settlement.

Early Origins of the Niehaus family

The surname Niehaus was first found in the farmlands of Westphalia, where it is believed that the name first emerged. There are no reliable written records from this earliest period of the surname's history that show the original bearers, but it is likely that the name was first given to a prominent householder residing in this region.

Early History of the Niehaus family

Spelling variations of this family name include: Niehaus, Niehuus, Nihus, Neuhaus and others.

Another 29 words (2 lines of text) are included under the topic Early Niehaus Notables in all our PDF Extended History products and printed products wherever possible.

In the United States, the name Niehaus is the 11,992nd most popular surname with an estimated 2,487 people with that name. [1]

Niehaus migration to the United States +

Niehaus Settlers in United States in the 19th Century

Niehaus Settlers in United States in the 20th Century