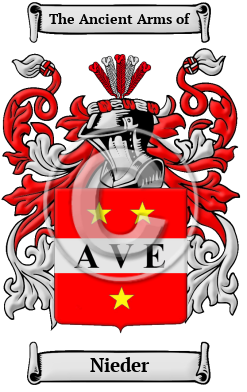 Early Origins of the Nieder family

The surname Nieder was first found in Bohemia, where the family contributed greatly to the development of an emerging nation and would later play a large role in the political conflicts of the area. The family branched into numerous houses, many of which acquired estates and manors throughout the surrounding regions, where they played significant roles in the social and political affairs. Individual bearers of the name first mentioned in ancient chronicles include Cunrad Nadler of Eger, Bohemia, in 1320, and Wenczel Nodler of Olmuetz, Moravia, in 1384. Over time, various suffixes were attached to the name among various branches of the family, thus the name "Nadelcziher" appears in chronicles of the Bohemian town Iglau in 1396. The Silesian variation "Noldner" first appears in chronicles of Liegnitz in 1566, which speak of a Thomas e. Noldner.

Early History of the Nieder family

This web page shows only a small excerpt of our Nieder research. Another 193 words (14 lines of text) covering the years 1537 and 1628 are included under the topic Early Nieder History in all our PDF Extended History products and printed products wherever possible.

Another 35 words (2 lines of text) are included under the topic Early Nieder Notables in all our PDF Extended History products and printed products wherever possible.

Migration of the Nieder family