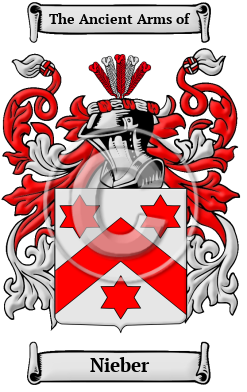 The old German family name Nieber is derived from several possible sources, and no doubt different families of this name emerged independently during the era in which surnames first began to be used. The Low German word 'nabur' meant "neighbor," and then came to be used as a surname. There was also a place named Nabern near Kustrin, a river so named in Wurtemburg, as well as a St. Nabor in the Alsace region.

Early Origins of the Nieber family

The surname Nieber was first found in Prussia, where the name emerged in medieval times as one of the notable families of the region. From the 13th century the surname was identified with the great social and economic evolution which made this territory a landmark contributor to the development of the nation.

Early History of the Nieber family

This web page shows only a small excerpt of our Nieber research. Another 116 words (8 lines of text) covering the years 1415, 1459, and 1857 are included under the topic Early Nieber History in all our PDF Extended History products and printed products wherever possible.

More information is included under the topic Early Nieber Notables in all our PDF Extended History products and printed products wherever possible.

Migration of the Nieber family

Some of the first settlers of this family name or some of its variants were: Josef Naber, who came to America in 1798; Alexander Neibaur, who came to Utah in 1848; Johann Niebuhr, who arrived in New York, NY in 1851; John P. Niebuhr, who was naturalized in Charles Town [Charleston], South Carolina in 1849.