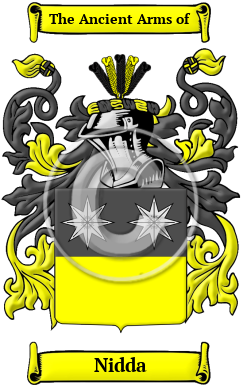 The roots of the distinguished surname Nidda lie in the region of Hessen. The name is of two possible origins; firstly, it is derived from the place name "Nied," a town on the Nidda river near Höchst on the Main. In this instance, the name would have been originally borne by someone who hailed from this region. Alternatively, the name is derived from the Middle High German word "niet," meaning "zealous, eager, enthusiastic"; in this case, the name was likely originally bestowed as a nickname, subsequently becoming a surname.

Early Origins of the Nidda family

The surname Nidda was first found in Hessen, where it first emerged. The earliest known bearer of the name was Joh. von Nied de Nyde, who was recorded in Mainz in 1380. The young Nidda family was instrumental during this early period, playing a crucial role in the development of medieval German society.

Early History of the Nidda family

This web page shows only a small excerpt of our Nidda research. Another 86 words (6 lines of text) covering the years 1380, 1403, 1414, 1703, 1814 and 1871 are included under the topic Early Nidda History in all our PDF Extended History products and printed products wherever possible.

Another 41 words (3 lines of text) are included under the topic Early Nidda Notables in all our PDF Extended History products and printed products wherever possible.

Migration of the Nidda family