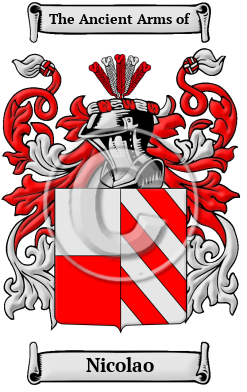 The surname Nicolao was a patronymic name created from the personal name Nicola, or Nicholas. The Italian name Nicola is itself derived from the Latin Nicolaus, and ultimately the Greek Nikolaos, which is composed of the elements "nikan," which means "to win," and "laos," meaning "people." As a personal name, versions of this name are found throughout Europe due to devotion to several saints who bore the name, especially Saint Nicholas. The most common type of family name found in the region of Venice is the patronymic surname, which is derived from the father's given name. In Italy the popularity of the patronymic type of surname is also due to the fact that during the Christian era, people often named their children after saints and biblical figures.

Early Origins of the Nicolao family

Early History of the Nicolao family

Prominent among members of the family was Niccolò de' Niccoli (1364-1437) was an Italian Renaissance humanist who was born and died in Florence. Giovanni Nicola, was an Archbishop in the 15th century in Amalfi, who later became the Archbishop of Verdun and the patriarch of Athens. In Pisa in the 16th century Agnolo Niccolini was created Archbishop and then Cardinal of the S. R. Church in 1563. The Nichelli family played an important role in the development of the famous Venetian glassware. They were official citizens of Murano, an island of Venice which, along with its sister island Burano, is famous today...
Another 102 words (7 lines of text) are included under the topic Early Nicolao Notables in all our PDF Extended History products and printed products wherever possible.

Nicolao migration to the United States +

Nicolao Settlers in United States in the 19th Century

Nicolao Settlers in West Indies in the 19th Century