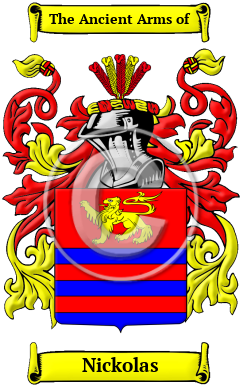 Early Origins of the Nickolas family

The surname Nickolas was first found in Austria, where the family was anciently associated with the political and religious conflicts of the area. They declared allegiances to many nobles and princes of early history, lending their influence in struggles for power and status within the region. The family founded numerous branches, many of which acquired manors and estates in surrounding regions, where they contributed to the prosperity of their society. The name refers to St. Nickolaus, the patron saint of seafaring merchants and the protector of children.

Early History of the Nickolas family

This web page shows only a small excerpt of our Nickolas research. Another 117 words (8 lines of text) covering the years 1330, 1339, 1402, 1417, and 1809 are included under the topic Early Nickolas History in all our PDF Extended History products and printed products wherever possible.

In the medieval era, many different cultural groups lived in the German states. There are thus many regional variations of German surnames from that era. Westphalians spoke Low German, which is similar to modern Dutch. Many German names carry suffixes that identify where they came from. Others have phrases attached that identify something about the original bearer. Other variations in German names resulted from the fact that medieval scribes worked without the aid of any spelling rules. The spelling variations of the name Nickolas include Nicholas, Nickelas, Nicholaus, Nicolaus, Nicolas, Nichlas, Nicklas, Niclas, Niklas, Nikolaus, Nikelaus, Nickelaus, Nickolaus and many more.

During this period prominent bearers of the name Nickolas were Nikolaus von der Fluee (1417-87), who was a Swiss hermit, and was canonized in 1947. Nikolaus von Jeroschin was a priest of the Teutonic Order. He wrote a life of St. Adalbert and a verse...
Another 44 words (3 lines of text) are included under the topic Early Nickolas Notables in all our PDF Extended History products and printed products wherever possible.

Nickolas migration to the United States +

After the First World War, Austria became a republic. The Treaty of Versailles broke up the empire in 1919 and many of the Sudeten Germans were incorporated into the new nation of Czechoslovakia. In the 20th century, many Austrians migrated to other parts of Germany or Europe, as well as to North America. In the United States, the majority of settlers landed in Philadelphia, and moved on to Ohio, Texas, Illinois, California, New York, and Maryland. Many German settlers also migrated to Canada, particularly Ontario and the Prairies. Amongst the settlers in North America with this distinguished name Nickolas were

Nickolas Settlers in United States in the 18th Century