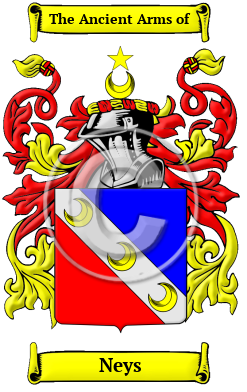 The German surname Neys simply means "new." It is likely that the name was first given as a nickname to a newcomer to an area, and was passed down as a hereditary surname to the original bearer's descendants.

Early Origins of the Neys family

The surname Neys was first found in various regions of Germany. Due to its nickname origins, it is likely that the name emerged independently as a surname in many different places, creating several original branches of the Neys family, each of which played an important role in the development of medieval society.

Early History of the Neys family

This web page shows only a small excerpt of our Neys research. Another 75 words (5 lines of text) covering the years 1577, 1647, 1704, 1727, and 1767 are included under the topic Early Neys History in all our PDF Extended History products and printed products wherever possible.

Spelling variations of this family name include: Neu, Ney, Neye, Neyge, Nige, Nue and others.

Another 31 words (2 lines of text) are included under the topic Early Neys Notables in all our PDF Extended History products and printed products wherever possible.

Neys migration to the United States +

Neys Settlers in United States in the 18th Century