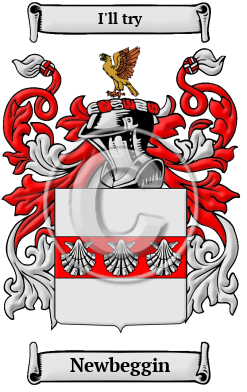 The Newbeggin surname is thought to be a habitational name taken on from any of several places so named in Northern England and Southern Scotland.

Early Origins of the Newbeggin family

The surname Newbeggin was first found in Berwickshire where the name is derived from the North England and Scottish word for a building or house. "Hence the phrase 'new biggin' was and is applied to any considerable edifice recently constructed. " [1] One of the first recordings of the name was when "the vill and lands of Newbigging in the parish of Camwath, Lanarkshire was passed into possession of the Somervilles through marriage with the daughter and heiress of Walter of Newbigging about middle of thirteenth century. Alan de Neubigging was one of twelve knights appointed in 1249 to meet twelve from Eng land to settle the law of the marches. " [2]

Early History of the Newbeggin family

This web page shows only a small excerpt of our Newbeggin research. Another 131 words (9 lines of text) covering the years 1180 and 1367 are included under the topic Early Newbeggin History in all our PDF Extended History products and printed products wherever possible.

Spelling variations of this family name include: Newbigging, Newbiggin, Newbegin and others.

More information is included under the topic Early Newbeggin Notables in all our PDF Extended History products and printed products wherever possible.

Migration of the Newbeggin family

Some of the first settlers of this family name or some of its variants were: Edmund Newbigin, who arrived in Philadelphia in 1832; and N. Newbegin, who came to San Francisco in 1852.