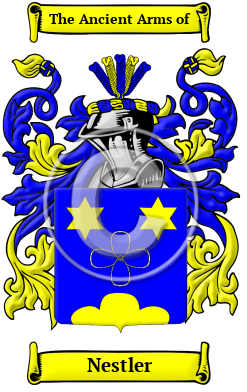 The roots of the distinguished German surname Nestler lie in the former duchy of Swabia. The name is derived from the Middle High German "nesteler," meaning "maker of thread or string." It is therefore likely that the progenitor of this name held such an occupation.

Early Origins of the Nestler family

The surname Nestler was first found in Swabia, where it is thought to have emerged. The original bearer of the name was likely a manufacturer of string or thread who came to be known as "Nestler" within his community. The earliest records of the name have been traced to the city of Koblenz, where Contrat Nesteli was living in 1290. The young Nestler family played a crucial role in the early history of the region, and contributed greatly to the development of medieval Swabian society.

Early History of the Nestler family

Another 34 words (2 lines of text) are included under the topic Early Nestler Notables in all our PDF Extended History products and printed products wherever possible.

Nestler migration to the United States +

Nestler Settlers in United States in the 18th Century

Nestler Settlers in United States in the 19th Century

Historic Events for the Nestler family +