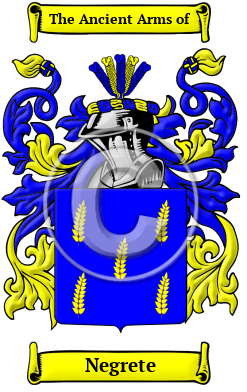 From this historical and fascinating Italian region have emerged a multitude of noble families, including the distinguished Negrete family. Italian people were originally known only by a single name, but it became necessary to adopt a second name as populations grew and travel became more frequent. The surname Negrete is derived from the Italian word "negri" which means "black." It was most likely originally a nickname for someone with a dark complexion, perhaps for an immigrant from northern Africa.

Early Origins of the Negrete family

The surname Negrete was first found in Ferrara, a city and comune in Emilia-Romagna, northern Italy, capital city of the Province of Ferrara. History dates the city back to 753. One of the first records of the name was Carlo Negri di Pietra Santa who was a Bishop of the city in 929. Ferrar, a city in Emilia Romagna is the capital of the province of Ferrara. Them city was at war with Venice in 1471. It is a walled city and notable is the Church of S.Cristoforo. Knitted goods and shawls are made. In those ancient times only persons of rank, the podesta, clergy, city officials, army officers, artists, landowners were entered into the records. To be recorded at this time was in itself a family honor.

Early History of the Negrete family

Italian surnames come in far more variations than the names of most other nationalities. Regional traditions and dialects are a decisive factor in this characteristic. For example, northern names tend to end in "o", while southern in "i". Also important, but not unique to Italy, was the fact that before dictionaries and the printing press most scribes simply spelled words according to their sounds. The predictable result was an enormous number of spelling variations. The recorded spellings of Negrete include Negri, Negro, Nigri, Nigris, Nigra, Negris, Negrelli, Negrotto, Negrello, Negroni and many more.

Prominent among members of the family was Gaspare Negri, a Venetian painter whose only known painting entitled "Virgin with the Dead Christ and Saints" can be seen in Boston. Andalò Negro of Genoa was master of the famous poet and author Boccaccio. Iacopo Negretti was a Venetian painter who lived around 1544. He was a pupil of Titian and finished Titian's last masterpiece, entitled "Pietà." He was one of the artists assigned to the redecoration of the Ducal Palace in Venice, and also did designs for numerous mosaics in Saint Mark's Cathedral. Cesare Negri was the ballet master at the Court...
Another 105 words (8 lines of text) are included under the topic Early Negrete Notables in all our PDF Extended History products and printed products wherever possible.

In the United States, the name Negrete is the 2,993rd most popular surname with an estimated 9,948 people with that name. [1]

Negrete migration to the United States +

A search of the immigration and passenger lists has shown a number of people bearing the name Negrete:

Negrete Settlers in United States in the 19th Century

Negrete Settlers in United States in the 20th Century