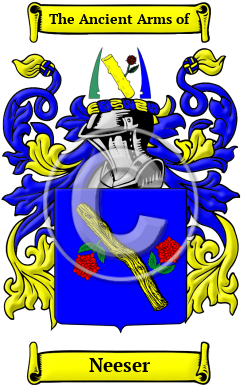 This name is usually matronymic in origin, derived from the first name of the mother of the original bearer. In this case, the surname Neeser stems from Nesensohn, which means the "son of Agnes." Agnes, from the Latin "agnus" for lamb, was a women's name which owed much of its popularity to the 4th century Roman martyr Agnes, the patron saint of virgins. The surname Neeser may also stem from the Middle High German word "Neser," referring to a "back-pack," and thus, may sometimes have originated in a nickname. In the Middle Ages, the surname became popular as Nese and Nethe. In the Lower Rhineland, the suffix "-ke" is often added to the name.

Early Origins of the Neeser family

The surname Neeser was first found in Southwestern Germany. A councilman from Kassel was recorded in 1350 as Johan Agnetis, in 1370 as Henne vern Agnesen, in 1371 as Johan Virin Angnesen, and in 1373 as Johan ver Angenesen. His son, Johan Agnesin was a citizen of Kassel in 1424. H. Agneter was recorded Mähren in 1382, and Heinrich Nesensohn, a minister from Hasenweiler in Ravensburg, in 1387. Benz and Heinrich die Agneser from Wellendingen in Rottweil were recorded in 1403. Records show Nesen Hans von Waltersweier in Offenburg in 1423, and Johan Agnese, a revenue writer, in Felsberg in Hesse in 1476. Ludwig Nesen from Bisingen in Hechingen was recorded in 1470, Peter Neser, a holy nurse from Stuehlingen in Waldshut, in 1472, and Johann Nesser, a procurator consistorii from Ensisheimensis, in 1570.

Early History of the Neeser family

This web page shows only a small excerpt of our Neeser research. Another 77 words (6 lines of text) are included under the topic Early Neeser History in all our PDF Extended History products and printed products wherever possible.

Another 39 words (3 lines of text) are included under the topic Early Neeser Notables in all our PDF Extended History products and printed products wherever possible.

Migration of the Neeser family

Some of the first settlers of this family name or some of its variants were: H. Jerge Nees and Hans Nees, who settled in Philadelphia in 1743 and 1749; Andreas Nees, who sail to Amercia in 1771; and Baltasar Ludwig Albrecht Nees and his wife and seven children emigrated from Hesse in 1833 and were headed to America. Charlie Nesen was naturalized in Texas between 1850 and 1906.