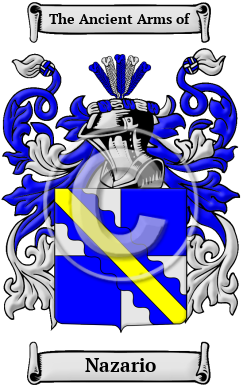 Early Origins of the Nazario family

The surname Nazario was first found in Italy. Nazario has been found in almost every part of Italy, but in the north in particular. The spelling variations of the name which end in "i" are mostly from the north, while those that end in "o" are mostly from the south. The occurrences of the name in the south are mostly concentrated in Naples. The name comes from the town of Nazareth, where Jesus spent his youth. The name might have been given to someone who came from that town, but more likely it was an ornamental religious name, not directly related to the man who first bore it but rather a Biblical reference.

Early History of the Nazario family

This web page shows only a small excerpt of our Nazario research. Another 39 words (3 lines of text) covering the years 1556, 1645, 1693 and 1758 are included under the topic Early Nazario History in all our PDF Extended History products and printed products wherever possible.

Another 47 words (3 lines of text) are included under the topic Early Nazario Notables in all our PDF Extended History products and printed products wherever possible.

In the United States, the name Nazario is the 5,608th most popular surname with an estimated 4,974 people with that name. [1]

Nazario migration to the United States +

Nazario Settlers in United States in the 19th Century

Nazario Settlers in United States in the 20th Century