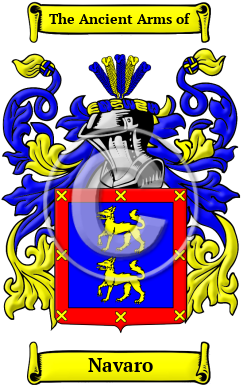 The mountainous borders of Spain contain the origins of the prestigious surname Navaro.The original bearer of the name Navaro, which is a local surname, once lived, held land, or was born in the beautiful region of Spain. In Spain, hereditary surnames were adopted according to fairly general rules and during the late Middle Ages, names that were derived from localities became increasingly widespread. Local names originally denoted the proprietorship of the village or estate. The Navaro family originally lived in the northern Spanish province of Navarra. The place-name Navarra is derived from the Basque word "nava," or "naba," which means "plain near the mountains."

Early Origins of the Navaro family

The surname Navaro was first found in Aragon, an important Christian kingdom of medieval Spain.

Early History of the Navaro family

Navaro migration to the United States +

Navaro Settlers in United States in the 16th Century

Navaro Settlers in United States in the 19th Century