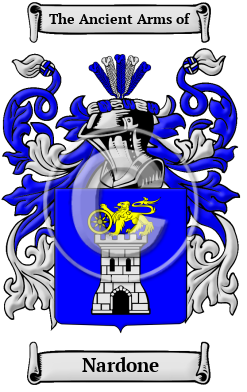 The Nardone surname was a patronymic name, created from the personal name Nardo, which was in turn, a shortened form of Bernardo.

Early Origins of the Nardone family

The surname Nardone was first found in the Kingdom of Naples, formerly Napoli or Neapolis, in southern Italy. There is also a city of Nardò in the province of Lecce, that dates from the Baroque era. Belisario Acquaviva, a nobleman and writer from the Kingdom of Naples became the first Duke of Nardo (Duca di Nardò) in the 15th century.

Early History of the Nardone family

Italian surnames have a surprising number of forms in comparison with other European surnames because they reflect the regional variations and the many dialects of the Italian language, each of which has its distinctive features. For example, in Northern Italy the most standard Italian surname suffix is "I", whereas in Southern Italy the most typical surname suffix is "O". Sardinian is very different from other forms of Italian and in fact, it is considered to be its own distinct language. Additionally, spelling changes frequently occurred because medieval scribes, church officials, and the bearers of names, spelled names as they sounded rather than according to any specific spelling rules. As a consequence of the major changes in the Italian language and in the local spellings of Italian surnames that occurred over the course of history, there are numerous variations for the surname Nardone. These spelling variations include Di Nardi, Di Nardo, Nardo, Nardone, Nardini, Nardi, Nardis, Nordi, Nordine, Nardino and many more.

By the end of the 15th century, southern Italy was known as the Kingdom of Naples, ruled by the house of Aragon. By the early eighteenth century, the Austrians had gained much of the region, under the rule of the Austrian emperor Kales VI. However, in 1734, Spaniard Don Carlos defeated the Austrians, and the region came under Spanish rule once more. In 1799, the French invaded Naples and in 1806, Napoleon's brother Joseph was made king, but this...
Another 78 words (6 lines of text) are included under the topic Early Nardone Notables in all our PDF Extended History products and printed products wherever possible.

In the United States, the name Nardone is the 9,523rd most popular surname with an estimated 2,487 people with that name. [1]

Nardone migration to the United States +

Nardone Settlers in United States in the 19th Century