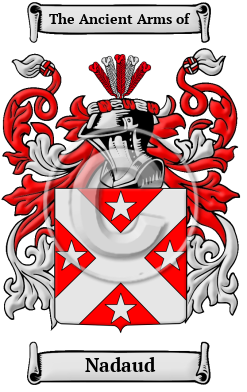 Early Origins of the Nadaud family

The surname Nadaud was first found in Burgundy (French: Bourgogne), an administrative and historical region of east-central France, where this important family was anciently seated.

Members of the family also settled in other regions of France, and several of them were well-known for their respective talents and achievements. From the branch of the family, Nadault, came three deputies for the states of Burgundy. Benjamin-Edme Nadault was president of the House of Inquiries of Burgundy in 1770. Gustave Nadaud (1820-1893) was a musician and singer, very well-known in France. He published more than three hundred songs, the most famous one being, "Les Deux Gendarmes." He also composed some operettas and was the author of a two-act comedy, "Dubois d'Australie" (1874).

Joseph Nadeau, born in 1637, son of Macia and Jeanne (née Despins), travelled from Genouillac, France to the New World in the 17th century. He married Marguerite Abraham in Quebec on 6th November 1665. Joseph died in Sainte-Famille-de-l'île-d'Orléans, Quebec and was buried there on 12th February 1677. [1]

Early History of the Nadaud family

Notable amongst the family at this time was Gabriel Naudé (1600-1653), a French librarian and scholar; Jean Nadault (1629-1691), a scholar; his grandson, also Jean Nadault, (1701-1779), a naturalist...
Another 28 words (2 lines of text) are included under the topic Early Nadaud Notables in all our PDF Extended History products and printed products wherever possible.

Migration of the Nadaud family

Some of the first settlers of this family name or some of its variants were: Joseph Nadeau dit Bé lair, who settled in Quebec in the 1700's; Jean Nadal, who arrived in Louisiana in 1756; George Nadin, who settled in Philadelphia in 1873..