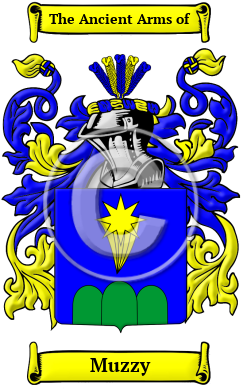 The distinguished surname Muzzy can be traced back to the ancient and beautiful region of Venice. Although people were originally known only by a single name, it became necessary for people to adopt a second name to identify themselves as populations grew and travel became more frequent. The process of adopting fixed hereditary surnames was not complete until the modern era, but the use of hereditary family names in Italy began in the 10th and 11th centuries. Italian hereditary surnames were developed according to fairly general principles and they were characterized by a profusion of derivatives coined from given names. The most common type of family name found in the region of Venice is the patronymic surname, which is derived from the father's given name. During the Middle Ages, Italians adopted the patronymic system of name-making because it perfectly complemented the prevailing Feudal System. In Italy the popularity of patronymic type of surname is also due to the fact that during the Christian era, people often named their children after saints and biblical figures. The surname Muzzy came from the name Muzzo, which is derived from the Latin name Mucius. The name may also be derived from the name Giacomuzzo, which is a variation of Giacomo, or James.

Early Origins of the Muzzy family

The surname Muzzy was first found in this region in the city of Bologna, which was one of the more prosperous cities at this early time. Records reveal that Spinello Muzza was a prominent member of the community in 1248.

Early History of the Muzzy family

This web page shows only a small excerpt of our Muzzy research. More information is included under the topic Early Muzzy History in all our PDF Extended History products and printed products wherever possible.

Enormous variation in spelling and form characterizes those Italian names that originated in the medieval era. This is caused by two main factors: regional tradition, and inaccuracies in the recording process. Before the last few hundred years, scribes spelled names according to their sounds. Spelling variations were the unsurprising result. The variations of Muzzy include Muzzi, Muzi, Muzzio, Muzio, Muzzo, Muzzarelli, Muzzarini, Muzzioli, Muzzati, Muziano, Muzani, Muzaro, Muzia, Muzza, Muzzani and many more.

Prominent among members of the family was Giovanni Muzzarelli, a humanist and poet from Mantua around 1490; Girolamo Muzio was another poet and novelist in Padua at the same time. Girolamo Muzzarelli was Bishop of Cosenza in 1552; of the Muzzoli family in Bologna were prominent Lodovico and Giovan-Paolo, the former a lawyer and the latter a philosopher and physician. Girolamo Muziano was a famous 16th century mannerist painter...
Another 69 words (5 lines of text) are included under the topic Early Muzzy Notables in all our PDF Extended History products and printed products wherever possible.

Muzzy migration to the United States +

Immigrants bearing the name Muzzy or a variant listed above include:

Muzzy Settlers in United States in the 19th Century

Muzzy Settlers in United States in the 20th Century