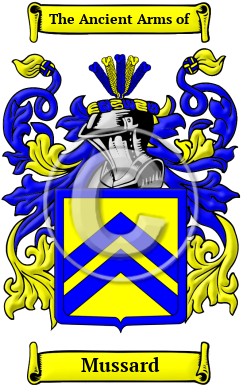 Early Origins of the Mussard family

The surname Mussard was first found in Derbyshire where "Ascuit, Hascoit, or Hasculphus Musard, holds a great barony in Domesday. Enisand Musard and Hugh Musard also appear there, the latter holding of the Countess Judith." [1]

Early History of the Mussard family

More information is included under the topic Early Mussard Notables in all our PDF Extended History products and printed products wherever possible.

Mussard migration to the United States +

Mussard Settlers in United States in the 17th Century

Mussard Settlers in United States in the 18th Century

Mussard Settlers in Australia in the 19th Century