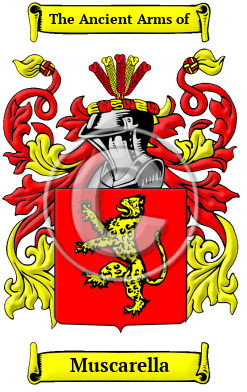 Early Origins of the Muscarella family

The surname Muscarella was first found in Pisa a town in Tuscany, capital of the province of Pisa. Historically, Pisa in it's inter city war in 1003 with Lucca was forced into building its own navy. Then, under threat from the Saracens from Sicily, it found itself the aggressor against Calabria, Sicily and even in Africa. In 1062 their ships returned from Palermo laden with spoil. But with the Norman Conquest of Sicily they became less profitable. They continued considerable rivalry with Florence and Genoa. In those ancient times only persons of rank, the podesta, clergy, city officials, army officers, artists, landowners were entered into the records. To be recorded at this time, at the beginning of recorded history, was of itself a great distinction and indicative of noble ancestry.

Early History of the Muscarella family

This web page shows only a small excerpt of our Muscarella research. Another 112 words (8 lines of text) covering the years 1016, 1167, 1550, 1732, 1530 and 1593 are included under the topic Early Muscarella History in all our PDF Extended History products and printed products wherever possible.

More information is included under the topic Early Muscarella Notables in all our PDF Extended History products and printed products wherever possible.

Migration of the Muscarella family

Some of the first settlers of this family name or some of its variants were: Joseph Mosconi, who arrived in California in 1876; Giacomo Moscone, who came to California in 1882; Manuel Mosca, who came to Providence, RI in 1872; as well as Vencenzi Moscallo, who settled in Louisiana in 1910..