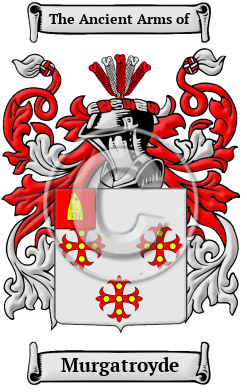 The Murgatroyde surname is thought to be a habitational name from an extinct place name near Halifax in West Yorkshire. It has been suggested that the place name derived from the medieval personal name Margaret and the Middle English word "royd," meaning "a clearing." [1]

"This surname is derived from a geographical locality. 'of Mergret's royd,' i.e. Margaret's clearing; This surname has ramified strongly in Yorkshire, the county of its birth. Gilbert and Sullivan have immortalized the name, if it needed immortalizing; but it was a strong flight of fancy to place it so far from its true home." [2] Reaney agrees "from a lost Yorkshire place, 'Margaret's clearing'" [3]

Early Origins of the Murgatroyde family

The surname Murgatroyde was first found in West Yorkshire where one of the first records of the name was Johanus de Morgateroyde who was listed as a constable appointed for the district of Warley in 1371. His name literally meant John of Moor Gate Royde. A few years later in 1379 in the Yorkshire Poll Tax Rolls, John Mergetrode was listed as holding estates in that shire at that time. [2]

" Yorkshire has long been the home of the Murgatroyds. In the 17th century the family owned for a time the Riddlesden estate in Bingley parish; the name is still in Bingley town. James Murgaitroit was a Yorkshire gentleman who subscribed £25 for the defence of his country at the time of the expected Spanish invasion in 1588." [4]

The expression "Heavens to Murgatroyd!" is an expression made famous by Hanna-Barbera cartoon character Snagglepuss and was inspired on the aforementioned Gilbert and Sullivan's "Ruddigore; or, The Witch's Curse," a Victorian comic opera that includes no fewer than seven "Murgatroyd" ghosts, all Baronets to the protagonist (and living) Sir Ruthven Murgatroyd who is disguised as Robin Oakapple, a young farmer. The name has also been lent to other fictional works by Virginia Woolf, Nancy Mitford, Agatha Christie, Clifford B. Hicks and Ann Turner.

Early History of the Murgatroyde family

This web page shows only a small excerpt of our Murgatroyde research. Another 134 words (10 lines of text) covering the years 1726 and 1739 are included under the topic Early Murgatroyde History in all our PDF Extended History products and printed products wherever possible.

More information is included under the topic Early Murgatroyde Notables in all our PDF Extended History products and printed products wherever possible.

Migration of the Murgatroyde family