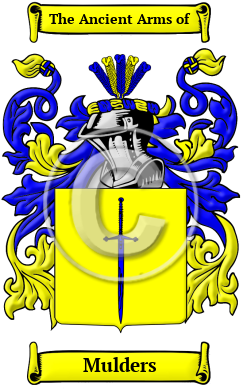 The Mulders family name has long been found in region known today as the Netherlands. It is unclear whether the name moved to the region from Germany, or arose independently in Holland. Mulders is an occupational name for a miller, derived from the Old Germanic "Mulinari."

Early Origins of the Mulders family

The surname Mulders was first found in Southern Germany, where they were established in the Middle Ages. The name is the German form of the Latin name "Molinarius," "Mulinari" in Old German. The modern form of the name, Mueller, is documented early on in the chronicles of Swabia, wherein the knight Conrad von Husen is noted as having become known as Mueller for his ownership of a mill.

Early History of the Mulders family

Another 36 words (3 lines of text) are included under the topic Early Mulders Notables in all our PDF Extended History products and printed products wherever possible.

In Netherlands, the name Mulders is the 241st most popular surname with an estimated 5,470 people with that name. [1]

Migration of the Mulders family

Some of the first settlers of this family name or some of its variants were: Jacob Mueller, who emigrated to America with his wife and five children in 1709; Hans Lendert Miller, who settled in Philadelphia in 1728; as did Heinrich Miller in 1740 and Adam Miller in 1754.