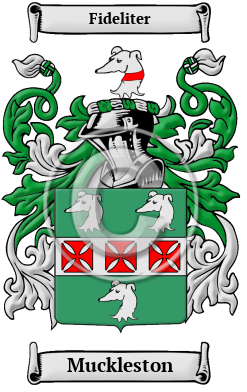 Early Origins of the Muckleston family

The surname Muckleston was first found in Shropshire, anciently known as Salop, where they were conjecturally descended from one Ethelred Muckle. One of the earliest records was Roger of Mokleston, Lord of the Manor of Muckleston, whose lands were seized by the Earl of Arundel for outlawry. Hoskyn Muccleston succeeded him in 1345. Two records of the place Muckleston were found: first as a hamlet in the parish of Shawbury and secondly as a parish in the union of Market Drayton.

Early History of the Muckleston family

This web page shows only a small excerpt of our Muckleston research. Another 102 words (7 lines of text) covering the years 1366, 1663, 1609 and 1698 are included under the topic Early Muckleston History in all our PDF Extended History products and printed products wherever possible.

More information is included under the topic Early Muckleston Notables in all our PDF Extended History products and printed products wherever possible.

Muckleston migration to the United States +

Muckleston Settlers in United States in the 18th Century

Muckleston Settlers in New Zealand in the 19th Century