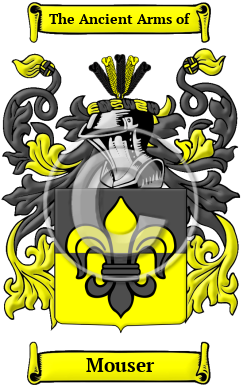 From the historical and enchanting region of Austria emerged a multitude of noble families, including the distinguished Mouser family. Originally, the Austrian people were known only by a single name. The process by which hereditary surnames were adopted in Austria is extremely interesting. Surnames evolved during the Middle Ages when people began to assume an extra name to avoid confusion and to further identify themselves. Often they adopted names that were derived from nicknames. Nickname surnames were derived from an eke-name, or added name. They usually reflected the physical characteristics or attributes of the first person that used the name. The name Mouser is a nickname type of surname derived from the German word maus, which means mouse, and was given to a person thought to bear some resemblance to the timid animal.

Early Origins of the Mouser family

The surname Mouser was first found in Austria, where the name was anciently associated with the tribal conflicts of the area. The name's literal meaning is "mouse catcher," or in some variations "small mouse," and stemms from the Latin form "Musculus." Chronicles first mention Ulrich Mueselin of Bamberg in 1147, Chunrich Meusel of Tirol in 1381, and L. Meisl, also of Tirol, in 1573. Gosswin Meuser is mentioned in 1268. The various branches declared allegiance to many nobles and princes of early history, lending their influence in struggles for power and status within the region. They branched into many houses, and their contributions were enlisted by many leaders in their search for power.

Early History of the Mouser family

This web page shows only a small excerpt of our Mouser research. Another 176 words (13 lines of text) covering the years 1514, 1770, 1775, 1807, and 1853 are included under the topic Early Mouser History in all our PDF Extended History products and printed products wherever possible.

Many cultural groups lived in the German states in medieval times. Each had its own dialect and traditions, and unique variations of popular names. Low German, which is similar to contemporary Dutch, was spoken in Westphalia. German names are characterized by additions such as regional suffixes and phrases that tell something about the origin or background of its original bearer. Further contributing to the variation in German names was the fact that there were no spelling rules in medieval times: scribes recorded names according to their sound. The recorded spelling variations of Mouser include Maeusel, Meusel, Meussel, Meuser, Mauser, Mauserer, Maueser and many more.

During this period prominent bearers of the name Mouser were Andreas Musculus (his real name was Meusel) (1514-81), who was an influential theologian and staunch supporter of Martin Luther. Karl...
Another 30 words (2 lines of text) are included under the topic Early Mouser Notables in all our PDF Extended History products and printed products wherever possible.

Migration of the Mouser family

Austria was made a republic after the First World War. The Austro-Hungarian Empire was broken up by the Treaty of Versailles and many of its people found themselves in the new nation of Czechoslovakia. Many other Austrians and expatriate Austrians made their way to North America in the 20th century. Most landed in Philadelphia, later continuing on to the states of Ohio, Texas, Illinois, California, New York, and Maryland. Some Austrian settlers also went to western Canada and Ontario. Research into the origins of individual families in North America revealed records of the immigration of a number of people bearing the name Mouser or a variant listed above: Hans Michael Mauser, who emigrated to Philadelphia with his wife Agatha Gomminger and six children in 1751. Matheus Mauser had preceded them, arriving in Philadelphia in 1732. Juno Gottlieb Mauser came to New Orleans in 1820. Peter Meisel came to America in 1782.