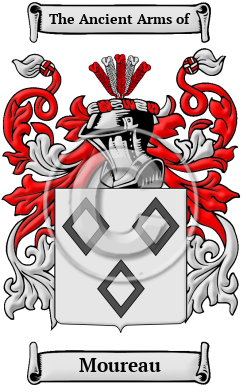 The name Moureau is a nickname type of surname and is derived from the French word "l'amour", which means "love". Surnames evolved during the Middle Ages when people began to assume an extra name to avoid confusion and to further identify themselves. Surnames derived from nicknames were quite common; they usually reflected physical characteristics or other attributes of the first person.

Early Origins of the Moureau family

The surname Moureau was first found in Guyenne, where a family of this name became established in the municipality of De Moureux, in the canton of Lagor, in the "Basses-Pyrénées" region.

Among the members of this family, who were actively involved in the activities of their day, was Antoine Adrien Lamourette (1742-1794). He was vicar-general of Arras, constitutional bishop of Rhône-et-Loire (1791), and was elected deputy of the Legislative Assembly. An outspoken politician, he wanted to put an end to the political disputes taking place in the Assembly, and therefore he suggested to the politicians, on July 7, 1792, that what was needed was a little fraternity among themselves. His suggestion was acknowledged by a famous round of hugging and kissing, and the occurrence was henceforth known as the "baiser Lamourette." A.-A. Lamourette was also very opposed to the massacres of September 1792, during the French Revolution.

Louis Lamoureux married Françoise Boivin in France in 1664. Together they travelled to Boucherville, Quebec where they settled until his death on 25th February 1715. Louis and Françoise had one son, Adrien, who was born in Boucherville on 7th May 1671. [1]

Early History of the Moureau family

This web page shows only a small excerpt of our Moureau research. Another 27 words (2 lines of text) covering the years 1810, 1834 and 1899 are included under the topic Early Moureau History in all our PDF Extended History products and printed products wherever possible.

Another 28 words (2 lines of text) are included under the topic Early Moureau Notables in all our PDF Extended History products and printed products wherever possible.

Migration of the Moureau family