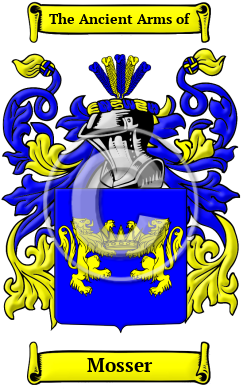 Early Origins of the Mosser family

The surname Mosser was first found in Swabia, where the name became noted for its many branches within the region, each house acquiring a status and influence which was envied and enrolled by the princes of the region. Chronicles first mention Rudolph in dem mose of Wuerttemberg in 1269, and Hainrich in dem Mos of Tyrol in 1379. In their later history the family became a power unto themselves and were elevated to the ranks of nobility as their influence grew.

Early History of the Mosser family

Spelling variations of this family name include: Moser, Mosier, Moeser, Moesier, Mosser, Mozer and others.

Notables with the surname Mosser during this period were Johann Jakob Moser (1701-1785), a German jurist and professor at Tuebingen who was imprisoned from 1759 to 1764 for speaking...
Another 29 words (2 lines of text) are included under the topic Early Mosser Notables in all our PDF Extended History products and printed products wherever possible.

Mosser migration to the United States +

Mosser Settlers in United States in the 18th Century