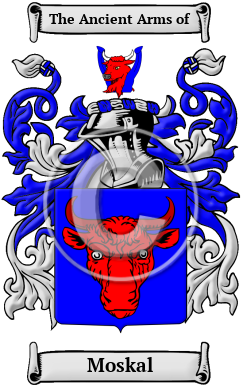 The surname Moskal is a patronymic surname formed by adding the Slavic suffix "-ovic" meaning "son of" to a transformation of the biblical Hebrew personal Moses ("Mosko" was a Polish pet form of the personal name Moses). Jews in Eastern and Central Europe only began to use fixed hereditary surnames near the end of the 18th century. Beginning in 1845 in Russia, Jewish people were compelled to choose or accept hereditary surnames. Because of the era when these names were assumed, it is highly unlikely that the name origins have to do with the place name Moscow.

Early Origins of the Moskal family

The surname Moskal was first found in Russia, where the name was born by members of the Jewish population of the Russian Empire.

Early History of the Moskal family

This web page shows only a small excerpt of our Moskal research. Another 72 words (5 lines of text) covering the years 146 and 1468 are included under the topic Early Moskal History in all our PDF Extended History products and printed products wherever possible.

More information is included under the topic Early Moskal Notables in all our PDF Extended History products and printed products wherever possible.

Moskal Settlers in Canada in the 19th Century