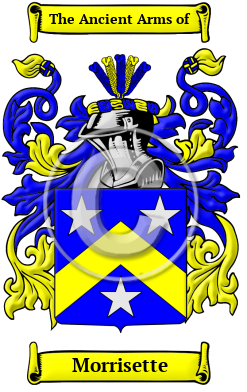 Early Origins of the Morrisette family

The surname Morrisette was first found in Guyenne, where the family was anciently seated.

Several members of this distinguished family became renowned. Jean Morisot, born in Dôle around 1510, was a scholar that studied medicine. Claude-Barthélemy Morisot was born in Dijon in 1592 and was the son of a consultant for the treasury of Dôle. He was also a scholar and died in Dijon in 1661. Antoine Maurice, born in Eyguières, a small village of Provence, was also a scholar. He died in Geneva in 1756.

Early History of the Morrisette family

Another 41 words (3 lines of text) are included under the topic Early Morrisette Notables in all our PDF Extended History products and printed products wherever possible.

Morrisette Settlers in Australia in the 19th Century