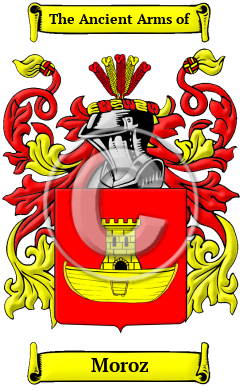 The Moroz surname comes from the given name Moroz, which in turn derives from an Old Russian word meaning "frost." This patronym was usually given to a person who was born during the winter.

In Russia, the name Moroz is the 429th most popular surname with an estimated 38,222 people with that name. [1]

Moroz Settlers in Canada in the 19th Century