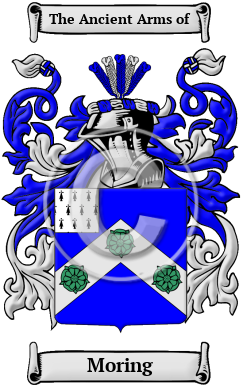 Early Origins of the Moring family

The surname Moring was first found in Durham where one of the first on record was Simon de Mereton in 1242. Alternatively, the name could have originated in Warwickshire at Meriden (Mereden), a parish that was anciently called Alspath, and formed part of the possessions of the Countess Godiva in 1043, and in the 12th year of the reign Edward II was the property of John de Segrave. Today, the parish is in the West Midlands and is the traditional center of England. Meriden literally means "pleasant valley" from the Old English "myre" + "denu." [1] The village of Kirk Merrington is also located in Durham and dates back to c. 1085 when it was first listed as Maerintun. By 1331, it was listed as Kyrke Merington. [1]

Early History of the Moring family

This web page shows only a small excerpt of our Moring research. Another 147 words (10 lines of text) covering the years 1510, 1600, 1086, 1455 and 1487 are included under the topic Early Moring History in all our PDF Extended History products and printed products wherever possible.

More information is included under the topic Early Moring Notables in all our PDF Extended History products and printed products wherever possible.

In the United States, the name Moring is the 14,536th most popular surname with an estimated 2,487 people with that name. [2]

Moring migration to the United States +

Moring Settlers in United States in the 19th Century

Moring Settlers in Australia in the 19th Century