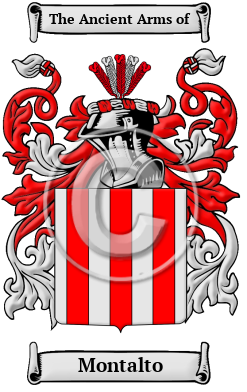 Early Origins of the Montalto family

The surname Montalto was first found in Naples, (Italian: Napoli, Latin: Neapolis) former capital of the Kingdom of the Two Sicilies in southern Italy; it is the chief city of the province of Naples. It shares with Istanbul the claim to be the most beautiful city in Europe. Naples has 237 Churches and 57 Chapels. The National Museum and other galleries contain riches in art and artifacts. In those ancient times only persons of rank, the podesta, clergy, city officials, army officers, artists, landowners were entered into the records. To be recorded at this time, at the beginning of recorded history, was of itself a great distinction and indicative of noble ancestry.

Early History of the Montalto family

This web page shows only a small excerpt of our Montalto research. Another 225 words (16 lines of text) covering the years 1279, 1300, and 1575 are included under the topic Early Montalto History in all our PDF Extended History products and printed products wherever possible.

By the end of the 15th century, southern Italy was known as the Kingdom of Naples, ruled by the house of Aragon. By the early eighteenth century, the Austrians had gained much of the region, under the rule of the Austrian emperor Kales VI. However, in 1734, Spaniard Don Carlos defeated the Austrians, and the region came under Spanish rule once more. In 1799...
Another 63 words (4 lines of text) are included under the topic Early Montalto Notables in all our PDF Extended History products and printed products wherever possible.

In the United States, the name Montalto is the 16,811st most popular surname with an estimated 2,487 people with that name. [1]

Montalto migration to the United States +

Montalto Settlers in United States in the 19th Century

Montalto Settlers in United States in the 20th Century