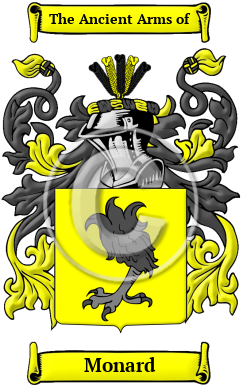 The surname Monard came from the Germanic personal name Munuald or Monald, which refers to one who governed with his wisdom and the power of his intellect.

Early Origins of the Monard family

The surname Monard was first found in the unique region of Umbria, in the ancient city of Orvieto. The earliest records of the Monard lineage date back to the 8th century rule of Charlemagne, with the Monaldeschi family.

Early History of the Monard family

This web page shows only a small excerpt of our Monard research. More information is included under the topic Early Monard History in all our PDF Extended History products and printed products wherever possible.

Prominent among members of the family was Lodovico Monaldeschi, who received the territory of Bagnorea from Emperor Ottone II in 975. The Monaldeschi family was also known for their status as supporters of the Guelph faction, that of the Church. From this family also emerged many Bishops: Monaldo, Bishop of Soana, and then Archbishop of Benevento; Tramo di Corrado was Bishop of Orvieto; Corrado di Luca was Bishop of Anagni; Gianfrancesco was the first Bishop...
Another 75 words (5 lines of text) are included under the topic Early Monard Notables in all our PDF Extended History products and printed products wherever possible.

Migration of the Monard family