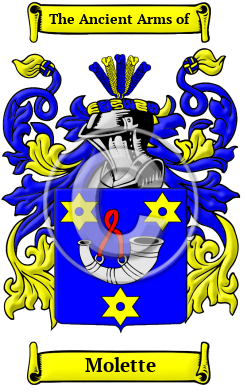 The ancestral home of the Molette family is the French region of Auvergne. Molette was a name for someone who lived in the administrative regions of Cantal and Puy-de-Dôme. The place-name survives as Aveyron, an administrative region just to the south of the historical location of the province.

Early Origins of the Molette family

The surname Molette was first found in Auvergne, a historic province in south central France.

Early History of the Molette family

This web page shows only a small excerpt of our Molette research. Another 192 words (14 lines of text) covering the years 1045, 1804, and 1813 are included under the topic Early Molette History in all our PDF Extended History products and printed products wherever possible.

French surnames were subject to numerous spelling alterations depending on the region and time it was used. The early development of the French language relied heavily on borrowing elements and grammar from other languages. For example, Old French was infused with Germanic words and sounds when barbarian tribes invaded and settled in France after the fall of the Roman Empire. Middle French also borrowed heavily from the Italian language during the Renaissance. As a result of these linguistic and cultural influences, the name Molette is distinguished by a number of regional variations. The many spelling variations of the name include Mollette, Molete, Mollet, Mollite, Molet, de Mollette, la Molete, de la Mollet and many more.

More information is included under the topic Early Molette Notables in all our PDF Extended History products and printed products wherever possible.

Migration of the Molette family

France was active as a cultural leader in the early 16th century. One particular area in which they lead was the exploration of the New World. The explorers, like Jacques Cartier in 1534, led the way to North America. Champlain, in 1608, made the first of twenty voyages to France to attract settlers and brought the first migrant in 1617. By 1675, there were 7000 French in Quebec, and the French Acadian presence in the Maritimes had reached 500. The French founded Lower Canada, thus becoming one of the two great founding nations of Canada. The family name Molette has made many distinguished contributions in France and New France to the world of science, culture, religion, and education. Amongst the settlers in North America with this distinguished name Molette were Elizabeth Mollet, aged 21; settled in Philadelphia in 1774; G. Mollet, aged 50; settled in New Orleans in 1820; Edward Mollett who settled in Virginia in 1738.