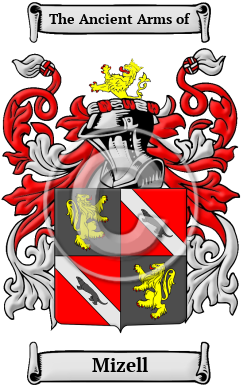 Early Origins of the Mizell family

The surname Mizell was first found in Austria, where the family was anciently associated with the political and religious conflicts of the area. They declared allegiances to many nobles and princes of early history, lending their influence in struggles for power and status within the region. The family founded numerous branches, many of which acquired manors and estates in surrounding regions, where they contributed to the prosperity of their society.

Early History of the Mizell family

This web page shows only a small excerpt of our Mizell research. Another 178 words (13 lines of text) covering the years 1775, 1807, and 1853 are included under the topic Early Mizell History in all our PDF Extended History products and printed products wherever possible.

During this period prominent bearers of the name Mizell were Ernst Adolph von Meissel, who served as Lord Chamberlain to the Queen of Sweden. Karl Meisl (1775-1853) was a Viennese playwrite with...
Another 32 words (2 lines of text) are included under the topic Early Mizell Notables in all our PDF Extended History products and printed products wherever possible.

In the United States, the name Mizell is the 5,900th most popular surname with an estimated 4,974 people with that name. [1]

Mizell migration to the United States +

Mizell Settlers in United States in the 20th Century