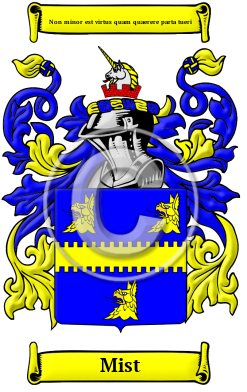 The Norman Conquest of England in 1066 brought many new words to England from which surnames were formed. Mist was one of these new Norman names. It was specifically tailored to its first bearer, who was a person who behaved in a masterful manner. This was also an occupational name for a person who was the master of his craft deriving from the Old French word maistre, and the Old English word maister.

Early Origins of the Mist family

The surname Mist was first found in Yorkshire where "Robert 'de Mosters' was a tenant of Earl Alan's in Yorkshire 1086, and also held Truswell in Nottinghamshire, part of the great Richmond Fee." [1]

Early History of the Mist family

A multitude of spelling variations characterize Norman surnames. Many variations occurred because Old and Middle English lacked any definite spelling rules. The introduction of Norman French to England also had a pronounced effect, as did the court languages of Latin and French. Therefore, one person was often referred to by several different spellings in a single lifetime. The various spellings include Master, Masters, Mosters, Measter, DeMaster and many more.

Mist Settlers in New Zealand in the 19th Century