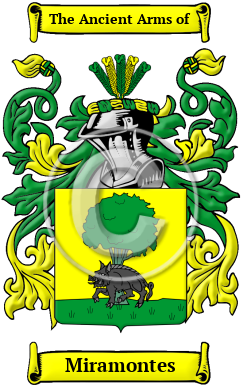 The Spanish surname Miramontes is of noble descent and appears to be of toponymic origin, deriving from a place name where the original bearer resided or held land. The family name Miramontes is composed of the elements "mira" and "montes," two Spanish words with the combined meaning of "place with a view of the mountains."

Early Origins of the Miramontes family

The surname Miramontes was first found in the village of Miramontes, situated in the province of La Coruna.

Early History of the Miramontes family

This web page shows only a small excerpt of our Miramontes research. Another 119 words (8 lines of text) covering the years 1809 and 1885 are included under the topic Early Miramontes History in all our PDF Extended History products and printed products wherever possible.

Spelling variations of this family name include: Miramontes, Miramontez, Miramonte, Miramón and many more.

Another 35 words (2 lines of text) are included under the topic Early Miramontes Notables in all our PDF Extended History products and printed products wherever possible.

In the United States, the name Miramontes is the 5,946th most popular surname with an estimated 4,974 people with that name. [1]

Migration of the Miramontes family

Some of the first settlers of this family name or some of its variants were: Juan De Miramonte who left Seville and emigrated to New Spain in 1562; and Florentino Miramonte who settled in Puerto Rico in 1860.