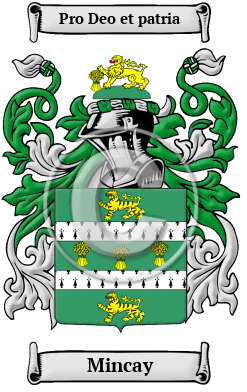 The Mincay surname was a habitational name taken from a place so named, in Shropshire. The placed name Minton is derived from the Welsh word "mynydd" meaning "hill," and the Old English word "tun," meaning "enclosure," or "settlement." [1]

Early Origins of the Mincay family

The surname Mincay was first found in Shropshire at Minton, a township, in the parish and union of Church-Stretton, hundred of Munslow. [2] The place name dates back to the Domesday Book of 1086 when it was first listed as Munetune. [3] There is another Minton in England. "Probably also some smaller spot in co. Northumberland. But this family has sprung from Shropshire." [4] The earliest record of the family was Walter de Muneton who was listed in the Select Pleas of the Forest for Shropshire in 1209. A few years later, Richard de Minton was listed in the Assize Rolls of Shropshire in 1221. [5]

Early History of the Mincay family

This web page shows only a small excerpt of our Mincay research. Another 87 words (6 lines of text) covering the years 1455 and 1487 are included under the topic Early Mincay History in all our PDF Extended History products and printed products wherever possible.

More information is included under the topic Early Mincay Notables in all our PDF Extended History products and printed products wherever possible.

Migration of the Mincay family