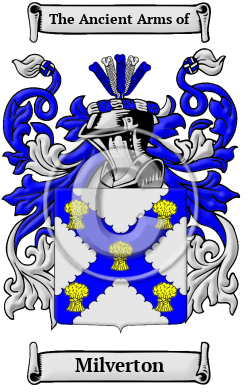 Early Origins of the Milverton family

The surname Milverton was first found in Warwickshire where the name is associated with the village of Milverton. At the time of the taking of the Domesday Book census in 1086 the village was held from William the Conqueror by the Count of Meulan, one of the nobles who accompanied the Conqueror in his defeat of England at Hastings in 1066.

Early History of the Milverton family

This web page shows only a small excerpt of our Milverton research. Another 68 words (5 lines of text) covering the years 1210 and 1751 are included under the topic Early Milverton History in all our PDF Extended History products and printed products wherever possible.

More information is included under the topic Early Milverton Notables in all our PDF Extended History products and printed products wherever possible.

Milverton Settlers in New Zealand in the 19th Century

Historic Events for the Milverton family +