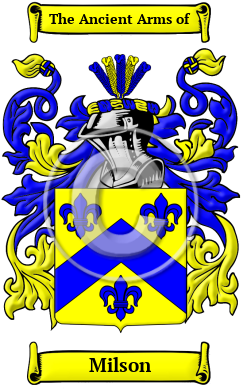 The name Milson was brought to England in the great wave of migration following the Norman Conquest of 1066. It comes from the popular Norman given name Miles.

Early Origins of the Milson family

The surname Milson was first found in Shropshire, at Milson, a parish, in the union of Cleobury-Mortimer, part of the Overs Hunderd which dates back to the Domesday Book where is was listed as Mulstone. At that time, there was a manor, and land for 6 ploughs. It was held by Osbern fitzRichard at that time. [1] The village had 160 inhabitants in 1848 and the local church was dedicated to St. George. The name was probably derived from the Old English personal name + "tun" [2] and literally means "farmstead of a man called Myndel or Miles. Today there is also a Milson Island in New South Wales, Australia and has been established for over 100 years. Milsons Point near Sydney, Australia was named after James Milson (1785-1872), from Lincolnshire one of the earliest settlers. In New Zealand, Milson is a suburb of Palmerston North, Manawatu-Wanganui.

Early History of the Milson family

This web page shows only a small excerpt of our Milson research. Another 77 words (6 lines of text) covering the years 1309 and 1329 are included under the topic Early Milson History in all our PDF Extended History products and printed products wherever possible.

A multitude of spelling variations characterize Norman surnames. Many variations occurred because Old and Middle English lacked any definite spelling rules. The introduction of Norman French to England also had a pronounced effect, as did the court languages of Latin and French. Therefore, one person was often referred to by several different spellings in a single lifetime. The various spellings include Milson, Millson, Milison, Millison, Millyson, Milyson, Myllison, Mylison, Myleson, Mylleson, Mylson, Milsom, Mylsom, Milsolm, Millsolm, Melsam, Melsan, Melson, Melsom, Milsson, Melsome and many more.

More information is included under the topic Early Milson Notables in all our PDF Extended History products and printed products wherever possible.

Milson migration to the United States +

Many English families left England, to avoid the chaos of their homeland and migrated to the many British colonies abroad. Although the conditions on the ships were extremely cramped, and some travelers arrived diseased, starving, and destitute, once in the colonies, many of the families prospered and made valuable contributions to the cultures of what would become the United States and Canada. Research into the origins of individual families in North America has revealed records of the immigration of a number of people bearing the name Milson or a variant listed above:

Milson Settlers in United States in the 18th Century

Milson Settlers in United States in the 19th Century

Milson Settlers in Australia in the 19th Century

Milson Settlers in New Zealand in the 19th Century