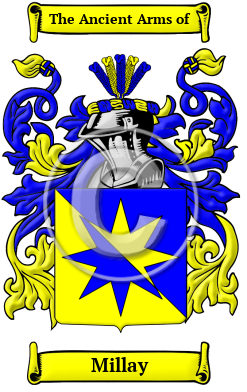 Early Origins of the Millay family

The surname Millay was first found in Burgundy (French: Bourgogne), an administrative and historical region of east-central France where the family has been traced from ancient times.

The family branched into Ile-de-France, Bourgogne, Dauphiné, Lorraine, Savoie, and they became the Barons of Challes and Barons of Faverges. Among the most recognized were: Theodore Millet, Colonel, who was named Knight of the Empire in 1810, then Baron of the Empire in 1813; Jean-François Millet (1814-1875), who was a talented painter, designer, and engraver. Today, parts of France are proud to be associated with such a dedicated family.

Early History of the Millay family

Notable amongst the family at this time was Theodore Millet, Colonel, Knight of the Empire; Francisque Millet (1642-1679), also known as Jean-François Milée or Millet I, a...
Another 27 words (2 lines of text) are included under the topic Early Millay Notables in all our PDF Extended History products and printed products wherever possible.

In the United States, the name Millay is the 16,816th most popular surname with an estimated 2,487 people with that name. [1]

Millay migration to the United States +

Millay Settlers in United States in the 19th Century