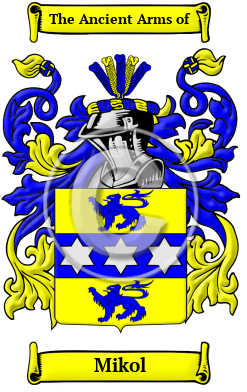 The name Mikol was born in the beautiful region of Bohemia, which is now part of Czechoslavakia. German surnames developed at a time when most of Bohemia, and most of the German provinces, were states of the Holy Roman Empire. At first people used only a single name, but as the population grew and people began to travel, they began to find it necessary to take on an additional name to distinguish themselves. Fairly general principles guided the development of hereditary surnames in Bohemia. The surname Mikol derived from the given name Michael, which derives in turn from the Hebrew Mika'el. It is composed of "mi" meaning "who," "ke," meaning "like," and "El," a shortened form of "Eloin," meaning "God," with the whole meaning of "who is like God," or "God-like." The popularity of the name Michael resulted from the devotion to the various Judeo-Christian holy figures bearing this name.

Early Origins of the Mikol family

The surname Mikol was first found in Bohemia, where the name emerged in mediaeval times as one of the notable families of the region. From the 13th century the surname was identified with the great social and economic evolution which made this territory a landmark contributor to the development of the nation.

Early History of the Mikol family

During this early period, notable bearers of the name Mikol included Tobias Michael (1592-1657), a German composer and kantor of the Thomaskirche in Leipzig, updated the church's hymnal in...
Another 28 words (2 lines of text) are included under the topic Early Mikol Notables in all our PDF Extended History products and printed products wherever possible.

Migration of the Mikol family

Some of the first settlers of this family name or some of its variants were: Franz Ludwig Michel, who came to the Carolinas in 1701. Among the several hundred settlers to follow this first immigrant were: Carle Vallenthien Michaels, who sailed to Philadelphia in 1730.