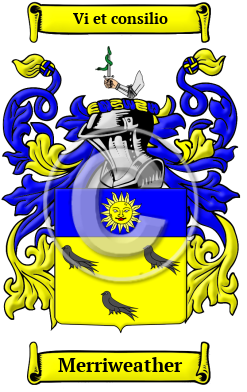 Early Origins of the Merriweather family

The surname Merriweather was first found in Kent at Mereworth, a parish, in the union of Malling, hundred of Littlefield, lathe of Aylesford. This ancient Saxon village dates back to 843 when it was first listed as Meranworth. By the time of the Domesday Book of 1086, the parish was known as Marovrde. [1] Literally the place name means "enclosure of a man called Maera" from the Old English personal name + "worth." [2] The name is often referred to as a nickname for someone who is a happy, genial or a sunshiny fellow. Some of the first listings of the name were found in the Hundredorum Rolls of 1273: Andrew Muriweder in Oxfordshire; and Thomas Murweder in Cambridgeshire. There is also an undated listing of Henry Muriweder in the Issues of the Exchequer. [3]

Early History of the Merriweather family

This web page shows only a small excerpt of our Merriweather research. Another 89 words (6 lines of text) covering the years 1150, 1674, 1718, 1701, 1703 and 1705 are included under the topic Early Merriweather History in all our PDF Extended History products and printed products wherever possible.

Another 36 words (3 lines of text) are included under the topic Early Merriweather Notables in all our PDF Extended History products and printed products wherever possible.

In the United States, the name Merriweather is the 5,263rd most popular surname with an estimated 4,974 people with that name. [4]

Merriweather migration to the United States +

Merriweather Settlers in United States in the 17th Century

Merriweather Settlers in West Indies in the 17th Century