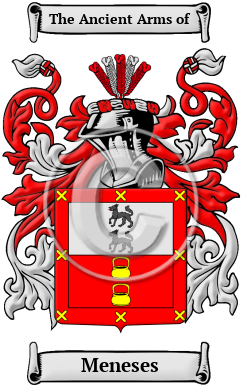 The surname Meneses is a habitational name from the province of Burgos, derived from the Old Spanish word "mena" and the Latin word "minae" meaning "battlement." The name was typically given to someone who lived on a high spot or mountain. Mena was also a Roman goddess. Today, the Valley of Mena (Spanish: Valle de Mena) is a municipality of the province of Burgos, Spain and has a population of 3,926.

Early Origins of the Meneses family

The surname Meneses was first found in Granada, in southern Spain.

Early History of the Meneses family

Spelling variations of this family name include: Mena, Meno, Minae, Menchaca and others.

Prominent among members of the family Juan de Mena (1411-1456), one of the most famous Spanish poets of the fifteenth century; António Luís de Meneses, 1st Marquis of Marialva and 3rd Count of Cantanhede (1603-1675), Portuguese general who fought in the Portuguese Restoration War; Francisco de...
Another 46 words (3 lines of text) are included under the topic Early Meneses Notables in all our PDF Extended History products and printed products wherever possible.

In the United States, the name Meneses is the 7,137th most popular surname with an estimated 4,974 people with that name. [1]

Meneses migration to the United States +

Meneses Settlers in United States in the 19th Century

Meneses Settlers in West Indies in the 19th Century