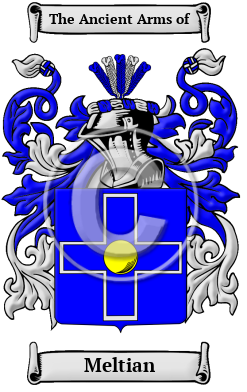 Early Origins of the Meltian family

The surname Meltian was first found in Norfolk, where the name is associated with the village of "Melton Constable." Roger Longsword held the village for a Bishop William, who in turn was granted the manor and estates by King William. At the taking of the Domesday Book census of England in 1086 the village consisted a Norman church, 8 cattle, and a tower. [1] The village was chartered in 1290 by King Edward 1st of England. The first on record of the name Melton was Siwate de Meltona who had moved north to Yorkshire in 1175. William Melton, Archbishop of York (d. 1340) is generally believed to have been born in Melton, in the civil parish of Welton, East Riding of Yorkshire. Melton is also a village in Suffolk about one mile north east of Woodbridge. Melton-Mowbray in Leicestershire is also of great significance to the family in early times. "The old name of this place was Medeltune, gradually contracted to Melton, indicating the situation of the town in the middle of the five hamlets that compose the parish; the adjunct Mowbray is the name of its ancient lords, which they assumed by command of Henry I." [2]

Early History of the Meltian family

This web page shows only a small excerpt of our Meltian research. Another 51 words (4 lines of text) covering the years 1273, 1379, 1317, 1340, 1325 and 1326 are included under the topic Early Meltian History in all our PDF Extended History products and printed products wherever possible.

Spelling variations of this family name include: Melton, Mellton, Meltone, Meltin, Melten, Meltan and others.

Another 33 words (2 lines of text) are included under the topic Early Meltian Notables in all our PDF Extended History products and printed products wherever possible.

Migration of the Meltian family