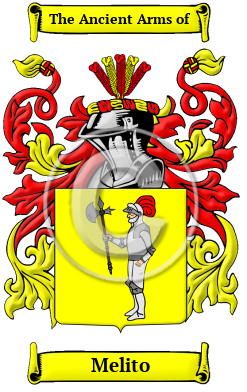 Early Origins of the Melito family

The surname Melito was first found in Calabria a territorial district of Italy. Ancient Calabria was in Lecce. Modern Calabria is in the southern extremity of Italy coasting the straits of Messina. Reggio and Messina are the cities of note. This beautiful region produces wine. Olive oil and fruit. Reggio was heavily bombed during WWII because of its strategic link with Sicily. In those ancient times only persons of rank, the podesta, clergy, city officials, army officers, artists, landowners were entered into the records. To be recorded at this time, at the beginning of recorded history, was of itself a great distinction and indicative of noble ancestry. Pre-dating the use of surnames, was Saint Melito of Sardis (d. circa 180,) a second century Christian bishop, religious authority and prolific writer.

Early History of the Melito family

This web page shows only a small excerpt of our Melito research. Another 122 words (9 lines of text) covering the years 1311 and 1334 are included under the topic Early Melito History in all our PDF Extended History products and printed products wherever possible.

More information is included under the topic Early Melito Notables in all our PDF Extended History products and printed products wherever possible.

Melito migration to the United States +

Melito Settlers in United States in the 20th Century