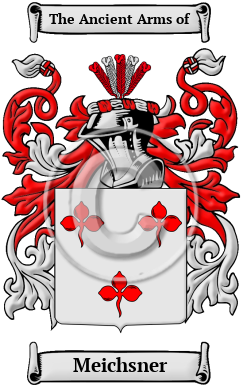 Early Origins of the Meichsner family

The surname Meichsner was first found in Meissen, where the name contributed greatly to the development of an emerging nation and would later play a large role in the tribal and national conflicts of the area. The name refers to the city or principality of Meissen, now a part of Saxony. In later years the name branched into many houses, each playing a significant role in the local social and political affairs.

Early History of the Meichsner family

Prominent bearers of the family name Meichsner at this time were Der Meissner, who was a Middle-High German poet of the late 13th century. August Gottlieb Meissner (1753-1803) was a professor in Prague before becoming the director of the Lyceum...
Another 39 words (3 lines of text) are included under the topic Early Meichsner Notables in all our PDF Extended History products and printed products wherever possible.

Migration of the Meichsner family

Some of the first settlers of this family name or some of its variants were: Hans Joachim Meissner, who came to Philadelphia in 1753. He was followed by Georg Meissner, who came in 1754. Many Meissners came to Texas, including C.W. Meissner in 1855.