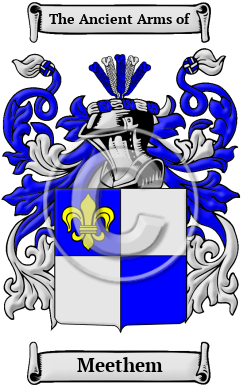 Early Origins of the Meethem family

The surname Meethem was first found in the East Riding of Yorkshire at Metham, a township, in the parish and union of Howden, wapentake of Howdenshire. "The township comprises 920 acres, of which two-thirds are arable. Metham Hall was built by Sir George Metham, whose family were long seated here." [1] At the time of the Domesday census, in 1086, Metham was occupied by Ilbert de Lacy, a Norman noble.

Some of the family were later found at Marr in the West Riding of Yorkshire. "It was once the residence of the family of Metham, of whose spacious and handsome mansion considerable remains existed some years since." [1]

Early History of the Meethem family

This web page shows only a small excerpt of our Meethem research. Another 34 words (2 lines of text) covering the years 1276 and 1573 are included under the topic Early Meethem History in all our PDF Extended History products and printed products wherever possible.

Another 38 words (3 lines of text) are included under the topic Early Meethem Notables in all our PDF Extended History products and printed products wherever possible.

Migration of the Meethem family

Some of the first settlers of this family name or some of its variants were: Samual Mettam (alternatively Methen) arrived in Virgina in 1713; and another Samual Mettam arrived in New York in 1854. S.Methan arrived in San Francisco in 1851..